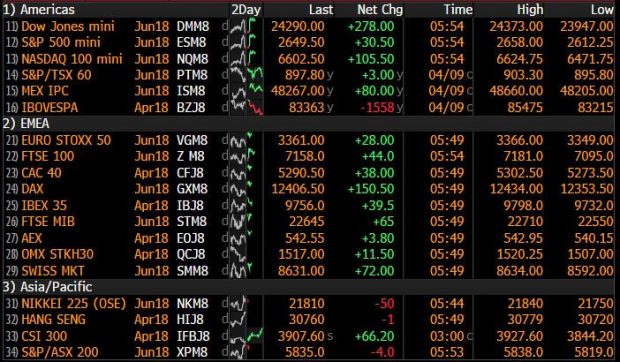 In what has become a daily see-saw pattern in global capital markets where the only variable is whether trade war sentiment du jour is better or worse, US futures have soared along with European and Asian shares after overnight China’s President Xi Jinping struck a “conciliatory tone” on trade during a major address, refusing to retaliate to Trump recent trade war escalation.

As we noted last night, President Xi’s speech at the Boao Forum outlined that the Chinese government intends to make a number of policy changes, including lower import tariffs for automobiles and other products, increase market access for foreign investors, strengthen protection of intellectual property rights, and create a more attractive investment environment for foreign investors. President Xi said implementation should be “as soon as possible” suggesting swifter implementation than before.

More importantly, Xi used his speech to dial down tensions on trade, framing a package of measures to open China’s economy, according to Bloomberg’s Tom Orlik. Still, while many of those steps are not entirely new, and the U.S. will likely want to see deeds, not just words, before it considers softening its protectionist stance, even so, with Xi’s speech positioning China as conciliatory, the chances of a damaging trade war appear somewhat lower.

“China is not interested in a trade war for sure, but the U.S. is not bluffing either,” Hans Goetti, founder of HG Research, told Bloomberg. “The truth is that the U.S. wants to come out on top of this, but I do know at some point there would be negotiations.”

“Markets will welcome this rational, measured response from President Xi,” said Ben Kwong, executive director in Hong Kong at KGI Asia Ltd. “By emphasizing that China will seek cooperation with other countries to achieve a win-win solution, Xi is projecting himself as the gentleman here.”

China was cast as the grown-up in the trade debate; committed to multilateralism, reducing tariffs, and protecting intellectual property. The speech does not allow the Trump Twitter Feed to report “mission accomplished”. If the US cannot spin a win, trade tensions are likely to continue.

Also, just hours after Xi’ speech, Bloomberg reported that trade talks between the US and China broke down last week after the Trump administration demanded that China curtail support for high-technology industries.  The U.S. demands came after Beijing offered to narrow the trade deficit by $50 billion, including by importing more liquefied natural gas, agricultural products, semiconductors and luxury goods, according to the person. The plans also included opening the financial sector at a faster rate and giving U.S. companies more access to China’s booming e-commerce market, the person added. At the same time, China has begun dispute procedure challenging President Donald Trump’s steel and aluminum tariffs, according to filing with WTO in Geneva.

And while the newsflow was decidedly mixed, algos remained stuck in euphoric “buy everything” mode thanks to Xi’s speech, and this morning futures and global markets were a sea of green. 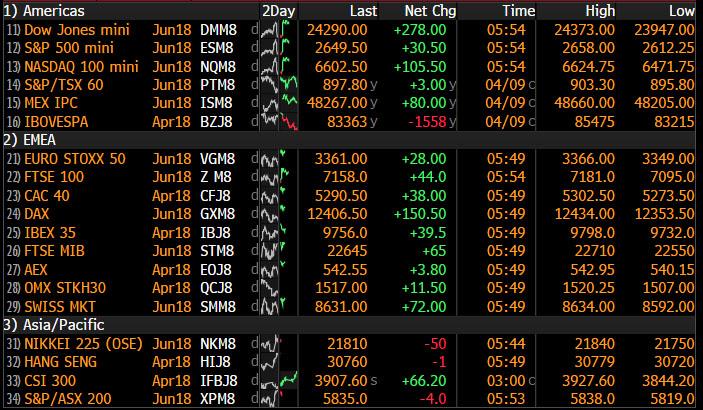 … As S&P futures rallied as much as 40 points on the Xi rally and traded near yesterday’s highs.

And even Chinese stocks closed at the highs.

In short, for now the euphoria part of the bipolar market dominates. That will change, however, as soon as Trump starts tweeting and reminds the market that his personal lawyer is now a target of an FBI probe that seeks to turn Trump’s most trusted confidant against him, and potentially result in a constitutional crisis should Trump decide to fire Mueller.

But not yet: and in addition to the surge in US futures, European equity markets positive across the board, led by mining sector. Leading sectors include industrials and consumer discretionary. Outperformance has come from individual stock moves in LVMH (+5.2%) with sales figures providing positive signals for the luxury sector, lifting Christian Dior (+3.7%) and Kering (+3.1%) in sympathy.

The strength in the Stoxx Europe 600 Index followed shares from Sydney to Hong Kong higher alongside oil and metals. Australia’s ASX 200 (+0.7%) and Nikkei 225 (+0.6%) were underpinned as markets reacted positively to President Xi’s bullish speech with Japan helped by a weaker currency and as automakers cheered the news of the reduced tariffs. China’s ramping Shanghai Comp. (+1.7%) and Hang Seng (+1.7%) conformed to the optimism.

In macro, the USD is marginally weaker against G-10, with a brief spike lower in USD/JPY after further reports of U.S/China talks having broken down. The pound advanced versus the dollar, touching a two- week high at 1.4179; Bank of England policy maker Ian McCafferty said in a Reuters interview that “we shouldn’t dally when it comes to tightening policy modestly.” The Norwegian krone slipped after inflation missed estimates in March. The Russian ruble tumbled a second day to the weakest level since December 2016 amid heightened geopolitical risks and U.S. sanctions.

Bund futures push higher in early trade due to large block trade, overall core fixed income still within a tight range. Crude futures and metals markets supported by generally positive environment. Material names have also been lifted as a result of the aforementioned improving risk sentiment positively affecting the sector due to their exposure to the tariff effects.

Expected U.S. data include wholesale trade sales and PPI. The ECB’s Nouy and Nowotny are both scheduled to speak. There was a clear effort by the ECB to signal economic strength yesterday. The Eurozone economy is likely to come off its recent highs this year as trend growth reasserts itself.

Away from that, Facebook’s Zuckerberg is due to testify before the combined Senate Judiciary and Commerce committee today following the investigation into the scandal around data protection. He will then face the House Energy and Commerce Committee tomorrow.