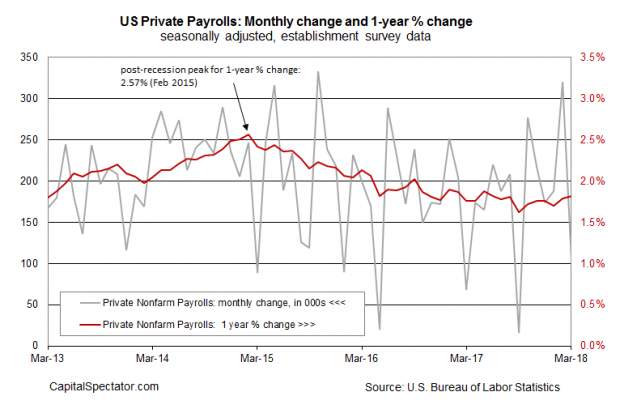 Companies in the US hired substantially fewer workers in March than economists expected, according to this morning’s monthly update from the Labor Department. But the sharp deceleration in growth looks like monthly noise, based on the steady moderate pace for the year-over-year increase in private employment.

US firms added 102,000 employees last month – below Econoday.com’s consensus forecast for 175,000 and far under the upwardly revised 320,000 gain in February. The latest rise marks the slowest advance in six months. But looking through the monthly volatility suggests that moderate growth prevails. On a year-over-year basis, private employment rose 1.8% in March, essentially unchanged from February and thereby marking the strongest set of annual gains since last August. 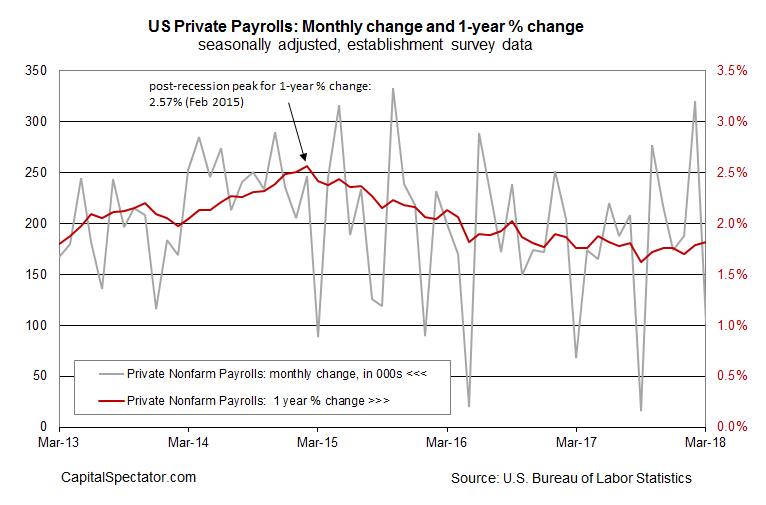 “This is some payback for strong job growth in February,” opines Ryan Sweet, an economist at Moody’s Analytics. He says that weather was a factor and so “there’s no reason to be depressed” about the surprisingly soft monthly change in March, adding that it’s “pretty much steady as she goes” in terms of the broad trend.

Paul Ashworth, chief US economist at Capital Economics, agrees, noting that today’s numbers aren’t expected to derail the Federal Reserve’s plans to raise interest rates. “The Fed will be primarily focused on the increase in average hourly earnings. Overall, looking through the volatility, employment growth is trending higher and wage growth is starting to heat up.”

Hourly wage growth for private-sector workers increased 2.7% last month vs. the year-earlier level, slightly above February’s 2.6% increase and just below the nine-year high of 2.8% that was briefly reached in recent history. 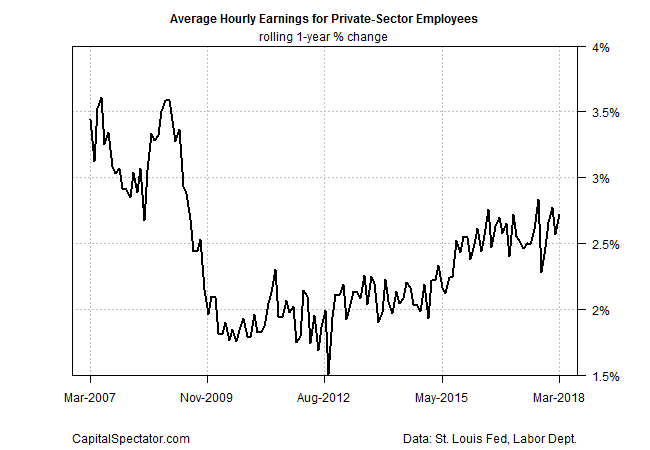 The rear-view mirror for the labor market, in short, still reflects a bias for moderate growth. The question is how or if the Trump administration’s increasingly confrontational trade policy changes the calculus for the outlook. After announcing sweeping tariffs on imports from China this week, Beijing responded with its own set of tariffs on US goods.