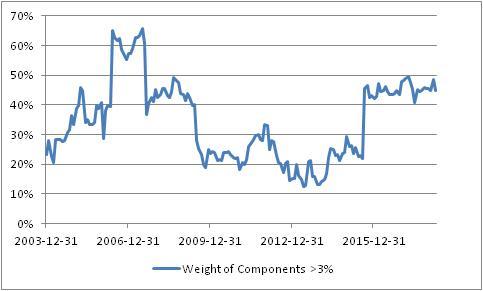 Why The M2 Slowdown Doesn’t Blunt My Inflation Concern

We are now all good and focused on the fact that inflation is headed higher. As I’ve pointed out before, part of this is an illusion of motion caused by base effects: not just cell phones, but various other effects that caused measured inflation in the US to appear lower than the underlying trend because large moves in small components moved the average lower even while almost half of the consumption basket continues to inflate by around 3% (see chart, source BLS, Enduring Investments calculations).

But part of it is real – better central-tendency measures such as Median CPI are near post-crisis highs and will almost certainly reach new highs in the next few months. And as I have also pointed out recently, inflation is moving higher around the world. This should not be surprising – if central banks can create unlimited amounts of money and push securities prices arbitrarily higher without any adverse consequence, why would we ever want them to do anything else? But just as the surplus of sand relative to diamonds makes the former relatively less valuable, adding to the float of money should make money less valuable. There is a consequence to this alchemy, although we won’t know the exact toll until the system has gone back to its original state.

(I think this last point is underappreciated. You can’t measure an engine’s efficiency by just looking at the positive stroke. It’s what happens over a full cycle that tells you how efficient the engine is.)

I expect inflation to continue to rise. But because I want to be fair to those who disagree, let me address a potential fly in the inflationary ointment: the deceleration in the money supply over the last year or so (see chart, source Federal Reserve).

Part of my thesis for some time has been that when the Fed decided to raise interest rates without restricting reserves, they played a very dangerous game. That’s because raising interest rates causes money velocity to rise, which enhances inflation. Historically, when the Fed began tightening they restrained reserves, which caused interest rates to rise; the latter effect caused inflation to rise as velocity adjusted but over time the restraint of reserves would cause money supply growth (and then inflation) to fall, and the latter effect predominated in the medium-term. Ergo, decreasing the growth rate of reserves tended to cause inflation to decline – not because interest rates went up, which actually worked against the policy, but because the slow rate of growth of money eventually compounded into a larger effect.