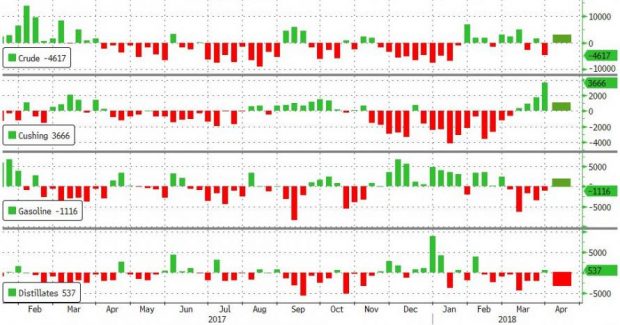 The last two days have seen WTI/RBOB prices soar (as trade-war fears ebb and Saudi hopes for higher prices) but they gave a little back after API reported a surprise crude build and notable Gasoline build.

Last week’s surprise Crude draw (and expectation of a draw) was turned around as API reported a surprise 1.758mm barrel crude build…

Notably the Brent-WTI spread widened above $5…

As Bloomberg reports, Chinese President Xi Jinping said zero-sum mentalities were “out of place” and backed dialogue to resolve disputes, dissipating fears of a trade spat with the U.S. Meanwhile, Saudi Arabia is said to want to get prices near $80 to fund spending and support the valuation of its state oil giant’s initial public offering.

Whether oil prices are up on fundamentals or not, “it’s a risk-on type day,” said Bob Yawger, director of futures at Mizuho Securities USA Inc. in New York. “The biggest correlation is to the equity markets.”

In two days, the oil market dispelled the pessimism of two weeks largely dominated by concerns over U.S.-China tensions and a buildup of stockpiles at America’s largest distribution hub in Oklahoma.

And the reaction to API’s surprise crude build…