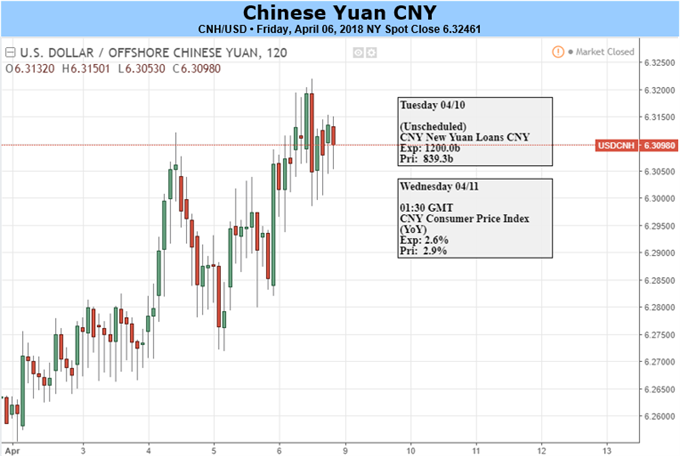 This week the offshore Yuan dropped for five consecutive days and had its largest loss against the U.S. Dollar since last October, amid the ongoing US-China trade disputes. US threatened US threatened US threatened . In the coming week, the wrestle between the largest two economies will continue to be a main theme. Also, China will release the March prints for trade, which may have been impacted by the tensions with the U.S.

Regarding China’s trade disputes, three things are to watch next week. First, details about the additional $100 billion Chinese products that will be imposed tariffs by the US. A release of the list will indicate the US makes a concrete move, and China is expected to respond accordingly then. China’s current strategy is to impose the same amount of tariffs for each of US’s moves. The selling in Yuan may extend amid deepened risk aversion; however, the Yuan is less likely to bear pressure from the U.S. directly, as a weaker Yuan is not helpful for the U.S. to reduce its deficit, which Trump has set as a primary goal.

Second, dialogues between the two parties. Note, so far, only Section 232 related tariffs have taken into effect for both countries: US steel and aluminum tariffs and China’s responsive $3 billion tariffs. In terms of another controversial issue, Section 301, both parties have announced plans but there is room to work on. The US’s tariffs on $50 Chinese goods will come into effect no soon than the end of May, when the 60-day public comment period is over; same for the additional $100 billion goods. The launch of China’s tariffs on $50 billion US products will depend on when the US tariffs take into effect. Thus, this still leaves a couple of weeks for the two parties to negotiate before the threats become reality.