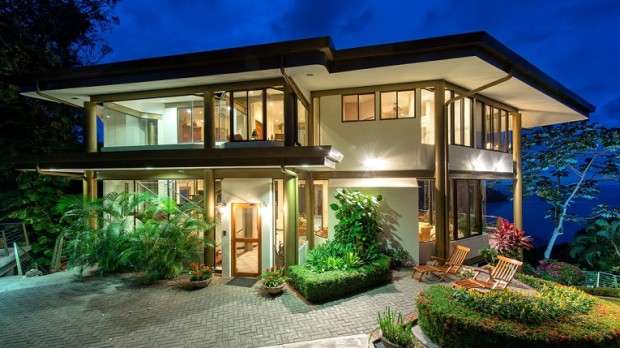 A FOUR-BEDROOM HOUSE WITH VIEWS OF JUNGLE AND OCEAN

This three-story modern home resembles a treehouse, nestled into the jungle three miles from 1,700-acre Manuel Antonio National Park, one of Costa Rica’s biggest tourist attractions. The house, built in 2002, was one of the first completed in Tulemar, a 33-acre gated community a short walk from a secluded beach.

The living area in the steel-frame house encompasses about 5,000 square feet, including covered balconies. There are four bedrooms and five bathrooms, with wide terraces accessible from almost every room and offering views of the Pacific Ocean. The front door leads to an open-design living area, dining area and kitchen. The flooring is ceramic tile. The furniture is included in the price. The kitchen has granite countertops, stainless steel appliances, a pantry and large windows with ocean views.

Large windows frame the living area, offering unobstructed jungle and ocean views. It has overhead fans, but no air-conditioning, a common arrangement in Costa Rica. (There are air-conditioning units in the bedrooms.) Outside is a long open-air deck with a narrow plunge pool. Monkeys, sloths and exotic birds are regular visitors, according to Dave Houck, an owner of Tulemar Vacation Home Rentals and Sales.

The top floor, accessible by a floating wood staircase, has two master bedroom suites and an office. One master bedroom features a bathroom with twin sinks and a whirlpool bathtub; the bathroom off the other bedroom has a shower with a glass door leading to the balcony. The office has a built-in wood desk and storage space; Wi-Fi is available throughout the house. All the rooms on this level access wide terraces with jungle and ocean views.

The remaining two bedrooms are on the bottom floor, each with its own bathroom, tile shower and deck. The two lower bedrooms also share a small kitchenette with a refrigerator.

The house sits on a lot of about two-thirds of an acre, which includes a wide, flat grassy area that has been used as a croquet court. There is no garage, but there is a storage area under the house, Mr. Houck said.

Within the Tulemar development, 45 homes have been completed. Amenities include two restaurants, four pools, resort shuttles and a concierge service. The homeowners’ association fee is $600 a month.

Tulemar is off a narrow, winding, two-lane mountain road, about halfway between the small fishing town of Quepos and the national park. It is within walking distance of a cluster of restaurants, open-air bars and a small market. Most people reach the area by driving from San José, which takes about four hours, or by flying into Quepos on one of the small Costa Rica airlines, which is a 25-minute trip. The house has been on the market for several months, but the price has not been lowered and the owners are in no rush to sell, Mr. Houck said. They rent it out for most of the year, typically for $6,500 a week during high season, from January to April, and as high as $13,000 a week during Christmas and New Year’s, Mr. Houck said. “There is a very strong following of repeat guests,” Mr. Houck said.

There is no multiple listing service or central database in Costa Rica, making it difficult to find accurate information on sales and pricing. When the international second home market stalled in 2008, sales in the Manuel Antonio area slowed to a trickle and prices dropped 20 to 30 percent, according to agents.

But activity has been picking up in the past year. “We’re definitely having an uptick in sales,” said Shawn Ferguson, co-owner of the Coldwell Banker office in Manuel Antonio and Quepos, a real estate agency.

The market is very dependent on the United States economy, which generates the largest group of buyers. “We’re probably six to eight months behind the U.S.,” Mr. Ferguson said. “As the U.S. heads up, so do we.”

The bulk of recent activity involves bargain homes priced below $350,000 and luxury properties priced over $800,000, according to agents. Investors are primarily interested in the higher-end villas to rent to tourists as vacation homes. “Less than $800,000 and they are not going to get the amenities they need” for a prime rental, Mr. Ferguson said.