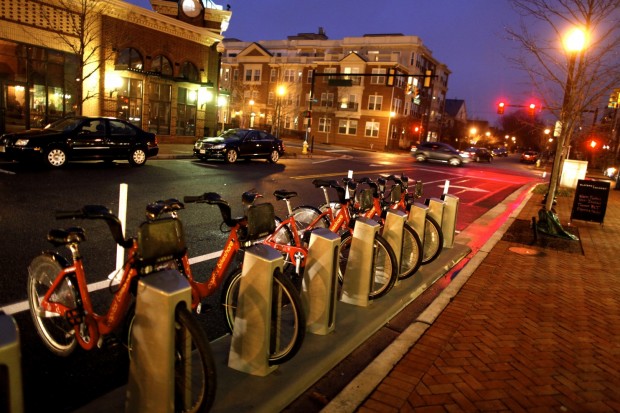 Where We Live: Potomac Greens has not-so-old townhouses not far from Old Town

In 2008, when they relocated to Northern Virginia, Shane and Nicole McCullar put together a wish list for their house hunting that looked like this:

They love to travel, so they wanted to be able to jump on a plane without a long commute from home. They wanted to be in the suburbs, but close to the District so they could regularly visit museums.

Though they desired to be in walking distance to Old Town Alexandria, they didn’t want to actually live in an old house.

The McCullars settled on Potomac Greens, a community of 227 townhouses off the George Washington Memorial Parkway in Alexandria.

“We got to pick our lot and all the specific finishes in our home to be exactly what we wanted,” Nicole McCullar said.

The community is not new anymore. Over the past seven years they’ve lived there, she said, neighbors have established a bond and worked to make Potomac Greens a charming place with an old-town feel. “It gave us the best of both worlds,” she said. “We’re a secret treasure back here.”

Said Potomac Greens Homeowners Association President Mark Anderson, who often is referred to as the unofficial mayor: “It’s metamorphosed itself. It went from a nice little townhome community to an enclave.”

Looking out for one another: The area that is now Potomac Greens used to be a railroad yard, dating back to the 1700s. “This was where the switching station was,” Shane McCullar said. At one point, the land was the proposed spot for FedExField.

Potomac Greens is a neighborhood where people want to get to know one another and look out for each other. Residents don’t hesitate to take in a neighbor’s package if they notice it’s been sitting out for a few days.

Shane McCullar said a neighbor had asked him to keep an eye out for a microwave oven that was being delivered but another neighbor had beaten him to it and had already taken it in from the rain. “They didn’t even know they were out of town,” he said laughing.

Pro-small business: Though residents have the convenience of big-name stores — such as the Target in the nearby Potomac Yards — Susan Martinez, owner of the neighborhood Slaters Market, said Potomac Greens is a community set apart from the bustle of that strip mall, in its own charming little nook. “It’s really a totally different world,” she said.

Residents don’t need to leave to meet any of their daily needs. The small shopping area south of the community has a wider variety of shops than some small towns.

Anderson noted that his neighbor spends every Friday night at Rustico on Slaters Lane, which residents say also has a great bar.

Nicole McCullar said she relies on Slaters Market for last-minute cooking needs and a good bottle of wine.

“It’s a real kind of neighborhood market,” Martinez said. “We know people by name, and we know their children and their grandmother and their dogs.”

Read more: Where We Live: Potomac Greens has not-so-old townhouses not far from Old Town