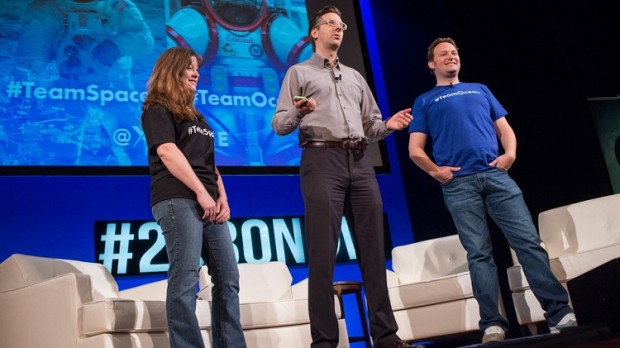 Ocean vs. Space: Which Is the True Final Frontier?

Space may be called “the final frontier,” but anyone who has seen a picture of a goblin shark or a vampire squid will agree that the ocean can be downright alien. Both realms are ripe for exploration, offer extensive potential benefits and come at a hefty price.

So which wins in a battle between the two for the title of the final frontier? Which area of exploration will result in the greater good for humanity? Dr. Paul Bunje, senior director of prize development and ocean health at the XPRIZE Foundation, and Alexandra Hall, senior director of Google Lunar XPRIZE, met on the Social Good Summit stage to duke it out on Tuesday.

Space has been the clear leader for a long time. $17.8 billion dollars is going toward space exploration in 2013, compared to the $5 billion dollars that goes toward oceanic exploration. This discrepancy has led to skewed results: While 500 individuals have been sent into space, only three have visited the deepest part of the ocean, the Mariana Trench.

We have better maps of the surface of Mars than we do of our own ocean floor, and we understand more about the dark side of the moon than ocean life. Despite centuries of ocean exploration, we’ve only covered about 5% of the ocean.

Bunje insists that this needs to change.

“In that 5% we have some of the most amazing things on this planet. We’ve got a mountain range, the Mid-Atlantic Ridge, that has thousands of peaks taller than the Alps are, for instance,” he said. “You’ve got, every time someone goes down, new species that are wondrous and unbelievably strange sometimes. And in reality, if you take all of the world’s oceans, that’s 99% of our living space on Earth, and we know almost nothing about it.”

Bunje also said that there are three reasons why the oceans deserve more research love: food, jobs and oxygen.

The ocean produces 20% of the world’s protein supply, and 3 billion people rely on the ocean for their livelihood. The ocean also produces 70% of Earth’s oxygen. These statistics, to Bunje and other ocean activists, mean that dangers like ocean acidification and climate change need our attention.

Hall insists that the investment isn’t as skewed as it seems. The simple fact that getting into space comes with a very large dollar sign must be taken into account when comparing the budgets. She insists that the reasons to explore space include economic benefit, national security and something that cannot be simplified down to a monetary amount: the satisfaction of our own curiosity.

Benefits of space exploration aren’t just about walking on the moon anymore. Research to put astronauts into space has resulted in great advancements in technology and medicine, and has resulted in the creation of jobs and economic benefits.

Beyond that, Hall insists, is the more romantic reason to continue space exploration: Space is inspiring.

Finding out about the origin of our planet Earth and the rest of the solar system is something that that we have a deep need to know about,” she said.

Hall insists that space research benefits the planet as well. Seeing Earth from space created a concept of Planet Earth. NASA has more money in its budget to be used towards Earth sciences than should go towards planetary sciences, and it has resulted in significant breakthroughs, including information on the melting ice caps, climate change and ocean surface temperatures.

The good news, when it comes to space versus the ocean, is that it doesn’t have to be one or the other. Both Bunje and Hall are working on million-dollar contests to increase research in space and in the ocean. Additionally, billions of dollars in government funding go toward research projects every year, in the hopes that some of these innovations can become a reality.

Which side are you on? You can continue the conversation online by using the hashtags #teamocean and #teamspace on Twitter and Facebook, or leave us a comment in the section below.

Read more: Ocean vs. Space: Which Is the True Final Frontier?