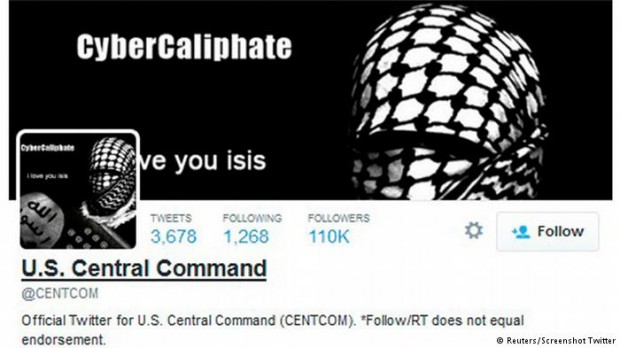 Hackers claiming allegiance to the Islamic State took control of the social media accounts of the U.S. military’s Central Command on Monday, posting threatening messages and propaganda videos, along with some military documents.

The command’s Twitter and YouTube accounts were eventually taken offline, but not before a string of tweets and the release of military documents, some of which listed contact information for senior military personnel. A Centcom spokesman confirmed their accounts were “compromised,” and said later that the accounts have been taken offline while the incident is investigated more.

“CENTCOM’s operation military networks were not compromised and there was no operational impact to U.S. Central Command,” a military statement said. “CENTCOM will restore service to its Twitter and YouTube accounts as quickly as possible. We are viewing this purely as a case of cybervandalism.”

Military officials added in the statement that their initial assessment is that no classified information was posted, and that none of what was released came from Centcom’s server or social media sites. The command will notify Defense Department and law enforcement authorities about the release of personally identifiable information and make sure that those affected are notified as quickly as possible, Centcom said.

Virtually all of the documents posted appear to already have been publicly available online, but the incident is nevertheless embarrassing to the U.S. military. Centcom oversees the U.S. military campaign against the Islamic State in Iraq and Syria, and frequently posts videos of airstrikes on the same accounts attacked Monday.

The United States and the Islamic State have waged a propaganda battle online for the better part of a year, after the militants rose to prominence and seized broad swaths of territory in Iraq and Syria. Twitter accounts sympathetic to the militants have distributed graphic images of beheadings and other violence along with threats, while the Defense Department and State Department have sought to expose the Islamic State as an oppressive group willing to slaughter innocent men, women and children.

The first rogue tweet Monday was posted about 12:30 p.m. and the account was not suspended for about another 40 minutes. The background and profile photo of the Twitter account were both changed to show an apparent militant and the phrases “CyberCaliphate” and “i love you isis,” using one of the acronyms for the militant group.

“AMERICAN SOLDIERS, WE ARE COMING, WATCH YOUR BACK,” one tweet said.

White House Press Secretary Josh Earnest said the Obama administration is “examining and investigating the extent of the incident.”

“This is something we are obviously looking into and something we take seriously,” he told reporters Monday, adding he didn’t have a lot of information. He said that there is a “pretty significant difference” between “a large data breach and the hacking of a Twitter account.”

The Centcom YouTube page also appeared to have been hacked, with two Islamic State propaganda videos added to the page and the same “CyberCaliphate” banner posted. The YouTube account was eventually “terminated due to repeated or severe violations” of YouTube’s guidelines, the website said.