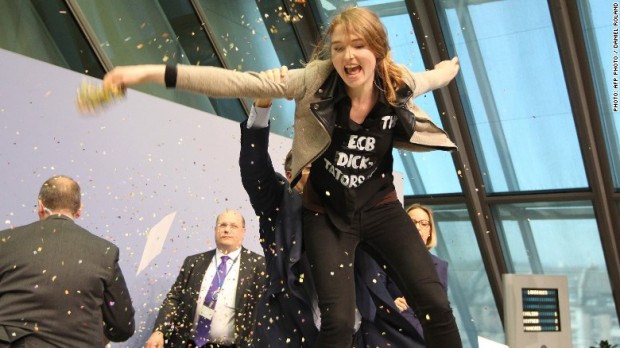 European Central Bank President Mario Draghi was attacked by a protester Wednesday during a briefing for journalists in Frankfurt.

Just minutes into his opening remarks, a women jumped onto his desk shouting “end ECB dictatorship!” She was carried out of the room by security guards, but not before showering the startled Draghi with confetti.

Draghi had just begun explaining how well the ECB’s new program of money printing was working when the attack happened. He was unhurt and the news conference resumed after a short break.

The ECB said initial findings of its investigation suggested the activist registered as a journalist for a news organization she did not represent. Her identity was checked on entering the building.

It’s the second public protest against the central bank in a month.

Riots erupted outside the ECB’s new $1.3 billion headquarters in March after thousands of protesters gathered to rage against an institution they blame for ruining the lives of millions in the eurozone.

Draghi has been credited with taking bold steps to save Europe from financial disaster: First in 2012 with his famous promise to do “whatever it takes” to prevent the euro from falling apart, and again early this year by launching a $1.3 trillion stimulus program to get the economy moving.

But the ECB is also a high-profile symbol of the austerity that has caused hardship for millions across the region. Together with the International Monetary Fund and European Commission, it formed the so-called “troika” to police bailouts that kept countries such as Greece, Ireland and Portugal afloat.