ApeCoin Pumps Over $17 on Rumors of Land Drop 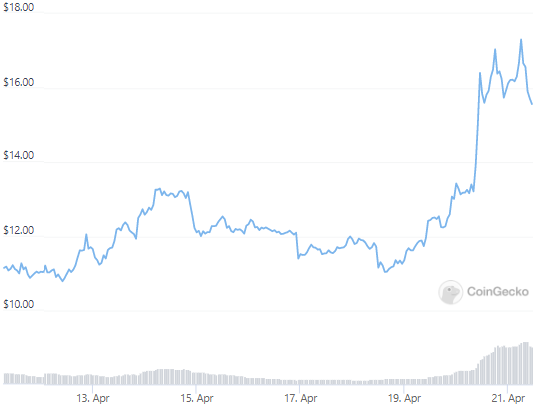 ApeCoin (APE) pumped to a weekly high of $17.52 on Wednesday following rumors that Bored Ape Yacht Club NFT holders will be airdropped virtual land plots in the planned ‘Otherside’ metaverse, and whitelisted to buy them.
Released by ApeCoin DAO, APE is the governance token that will power all transactions in that upcoming metaverse, including any digital land sales.
Plots of virtual land space represented by NFTs that can be bought and sold by traders is a popular concept pioneered by other NFT projects such as Decentraland and The Sandbox.
Genesis Drop
While unconfirmed, slides from a Yuga Labs presentation were leaked on Twitter revealing 200,000 land plots will eventually form the Otherside metaverse and a percentage of the first batch will be given away to Bored Ape and Mutant Ape holders in an airdrop called the ‘Genesis drop’.
According to the slide 30,000 land plots will go to BAYC / MAYC owners, which is 30% of the initial batch of 100,000 plots in the Genesis drop.
The Coinbase entertainment team also announced earlier in April that a BAYC film trilogy is in production. All the current bullish news could see the ApeCoin price continue to move up in Q2 2022.
<!–esi

ApeCoin +33% Weekly Candle
Relatively new crypto ApeCoin only has six weekly candles in its current price history since being listed on major exchanges like Binance and eToro.
The currently weekly low is $10.90. So the volatile coin has moved up over 60% from the lows to the mid-week top of $17.52.
The ApeCoin price is currently trading between $15 – $16 and based on the weekly open of $11.69 the weekly candle is +33% in the green.
ApeCoin is now ranked #33 on Coinmarketcap with a market capitalization of $4.45 billion.
The floor price of Bored Ape NFTs also made a new all time high this week of 124 ETH.
Related Articles