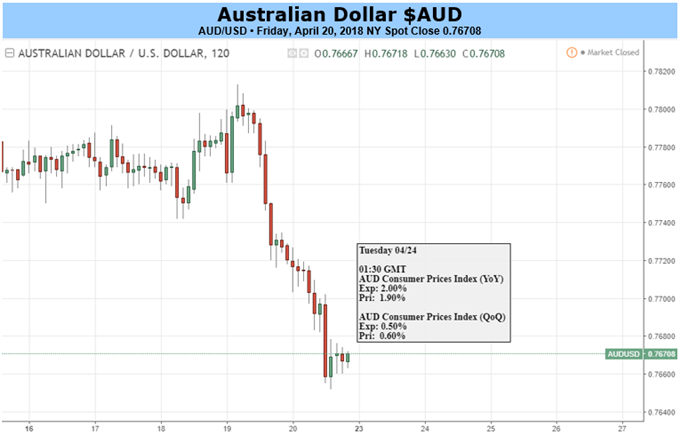 The Australian Dollar was on its way to finish another week higher against its US counterpart. It did show some temporary weakness on softer Chinese industrial production figures and a rather disappointing local jobs report. However, it recovered in both instances in the aftermath. It wasn’t until closer towards the end of the week when things went south.

A pickup in hawkish Fed rate hike expectations
, which were fueled by comments from Lael Brainard, boosted the US Dollar and the 10-year government bond yield rose to a 2-month high. The appeal of these assets relatively speaking hurt stocks as the S&P 500 declined about 0.6%. The sentiment-linked Aussie Dollar fell to its lowest point against its US cousin since April 10th.

Perhaps this speaks to what the currency is more interested in, and brings us to what next week has to offer. The Reserve Bank of Australia is at the moment in no rush to adjust monetary policy. In fact, RBA’s minutes from their April rate decision reiterated this. Taking that into consideration, this may have been why there was a lack of follow-through from the Australian Dollar to last week’s Chinese and local economic statistics.

But there is one kind of data that may have a more pronounced effect on the Aussie. On Tuesday, we will get Australia’s first quarter inflation report. There, the headline rate is expected to rise to +2.0% y/y from 1.9% in the fourth quarter. Such an outcome would mean price growth in the lower boundaries of the RBA’s 2 – 3 percent target. Data out of the country has been crossing the wires below economists’ expectations as of late. If a similar situation reduces the urgency for the RBA to consider hiking, then the Aussie Dollar could fall.