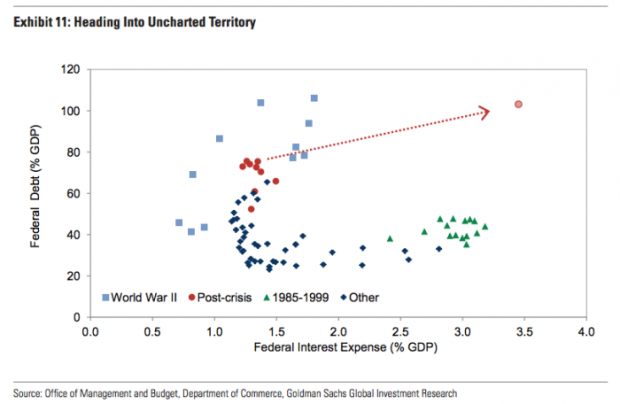 By 2023, America Will Be In Worse Fiscal Shape Than Italy, Mozambique And Burundi

You all know that America’s fiscal situation is deteriorating rapidly, right?

Sure you do. And you’re probably also aware that Larry Kudlow’s protestations notwithstanding, the CBO is likely correct to suggest that Trump’s tax cuts are going to be seen in hindsight as a catastrophic mistake from the perspective of fiscal rectitude. Here’s what Kudlow told state TV on Tuesday about the CBO:

They’re always wrong, especially with regards to tax cuts, which they never score properly because they don’t understand the growth, the incentives and the encouragements to reward success.

Ok, Larry. I guess no one else (besides maybe Kudlow and Trump) “understands” this either because according to pretty much everyone who isn’t part of the administration, Trump’s fiscal policies are not only anomalous (in terms of the timing of fiscal stimulus), but are destined to balloon the deficit on the way to catapulting the U.S. into uncharted fiscal territory. Recall this chart from Goldman, for instance:

I’m not going to rehash this discussion at length here. If you’re interested and haven’t heard enough to convince you yet, then you can read any one of David Stockman’s recent pieces on the subject or, if you’d rather, you can check out the following posts that cite multiple sources including Credit Suisse, SocGen, Goldman, BofAML, and on and fucking on:

And it’s hardly just Wall Street. Here’s an excerpt from a WaPo piece out yesterday that documents the Kudlow comments cited above on the way to reminding you that pretty much everyone says the same thing about the fiscal path we’re on: