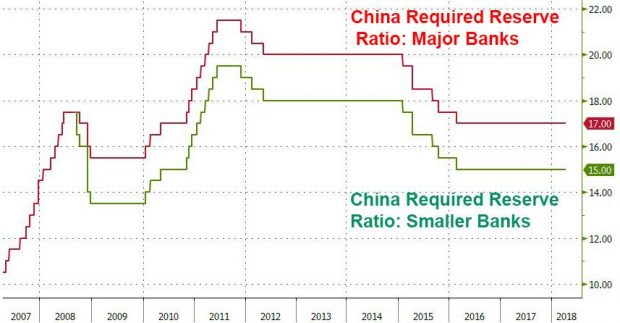 It’s only logical that one day after Trump accused China (and Russia) of playing the “currency devaluation game” in a time of rising Fed rates, that Beijing would respond by doing precisely what it was accused of, and moments ago the PBOC announced that effective April 25, China’s central bank will cut the reserve requirement ratio (RRR) for qualified banks by one percentage point.The new targeted RRR will be effective April 25.

The PBoC said that that the cut is for banks to repay MLF loans and will release about 400BN yuan of liquidity net (excluding the MLF repayment). According to preliminary calculations, this targeted easing move is similar to what the PBOC did back in September 2017, when China cut the RRR by at least 50 bps; it marked the first RRR cut since February 2016.

So far, there has been no reaction in the USDCNH which trades at 6.2750. And while overnight Q1 YoY GDP was reported as coming in at 6.8%, various analysts have echoed what we said here recently, raising concerns that Chinese growth may have peaked at this juncture.

Here are some additional observations on China’s latest econ data from Bloomberg Economics’ Tom Orlik who writes that stead expansion in China’s 1Q GDP shows the economy shaking off threats from deleveraging and protectionism, however adding that a lower reading for nominal growth is a warning sign that the industrial reflation cycle that drove profits higher and made debt repayment more manageable in 2017 is turning down: