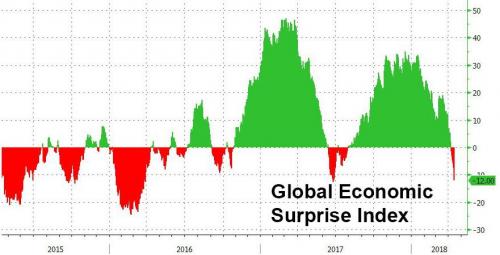 Citi: “There Is A Massive Problem” With The Bond Market

Is the global economic recovery over?

That is the question investors are grappling with just as Q1 earnings season – the best since 2011 with its 18% Y/Y expected EPS growth – enters its busiest week yet. Meanwhile, as discussed here extensively in recent weeks, over the past two months economic data from around the globe, but especially Europe and the US, has come in unexpectedly soft resulting in the first negative print in Citi’s Global Eco Surprise Index, and now the most negative since early 2016.

And, more notably, an inversion in the forward OIS curve – the first in 13 years – which as JPMorgan noted was the clearest confirmation that the US economy is very “late cycle”, and that a conventional yield curve inversion (2s10s), a harbinger of recession, is not far behind.

Incidentally, the topic of an economic slowdown gripping the global economy was the topic of Citi’s entire macro weekly notes one week ago; curiously, the bank went so far as to “calculate that the Fed has already moved into slightly restrictive territory vs. equilibrium rates and that further tightening from here will be a growth and risk asset negative.”

In other words, all else equal, the Fed should end its tightening cycle.

Economic slowdown worries – and indicators – aside, another critical discussion taking place in parallel is whether the market can keep rising even as yields push higher; this has become especially topical as a result of recent speculation that inflation is rising even as growth is slowing, a warning flag that stagflation may be just around the corner.

And, as Citi’s global macro strategy team writes in its latest weekly report, “one of the more contentious issues in the market at the moment surrounds the debate as to whether both equities and long term yields can move higher simultaneously. This is an interesting debate, particularly due to the fact that equity markets have failed to gain significant momentum to the upside, whilst equity market volatility has seemed to re-price back to ‘normalcy’.”

To Citi, the equity part of the debate is relatively clear: there won’t be a resolution for a while, as much of the recent pent up euphoria has fizzled and will need months to be rebuilt: