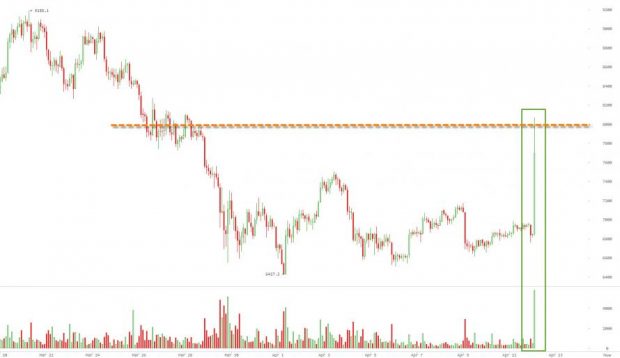 Today, Bitcoin exploded higher by over 15% (the biggest move since 2017), breaking above $8,000 on extremely heavy volume as the cryptocurrency tests above its 200-day moving-average.

Speculative chatter on the driver behind the move is Russian oligarchs buying (though we note that Bitcoin actually fell on the announcement of the sanctions last week). This is obviously unconfirmed…

Have Russian billionaire oligarchs started converting their net worth into crypto

Additionally, and perhaps more likely, this is a reflexive easing from the tax-related selling pressure that many have discussed as a big driver of cryptos downside ahead of next week’s tax deadline.

Extremely heavy volume on this upswing… The move peaked at around 16%, before fading back to a more stable 11% gain.

Bitcoin is testing its 200DMA…

It’s not just Bitcoin, the entire crypto space is bid for now…

While this panic-bid is notable – the biggest spike since 2017 – the price of bitcoin has nearly halved in the four months of the year so far, and its unlikely to top its all time high of $19,843, set in December, ever again, Barclays says.

“Unlike past peaks in Bitcoin prices, the survey evidence, based on our modeling, suggests that the speculative bubble in crypto currencies may have passed its peak,” the bank said as part of its annual Equity Gilt report this week.

Here’s where the bank’s model predicts bitcoin’s price will go from here: 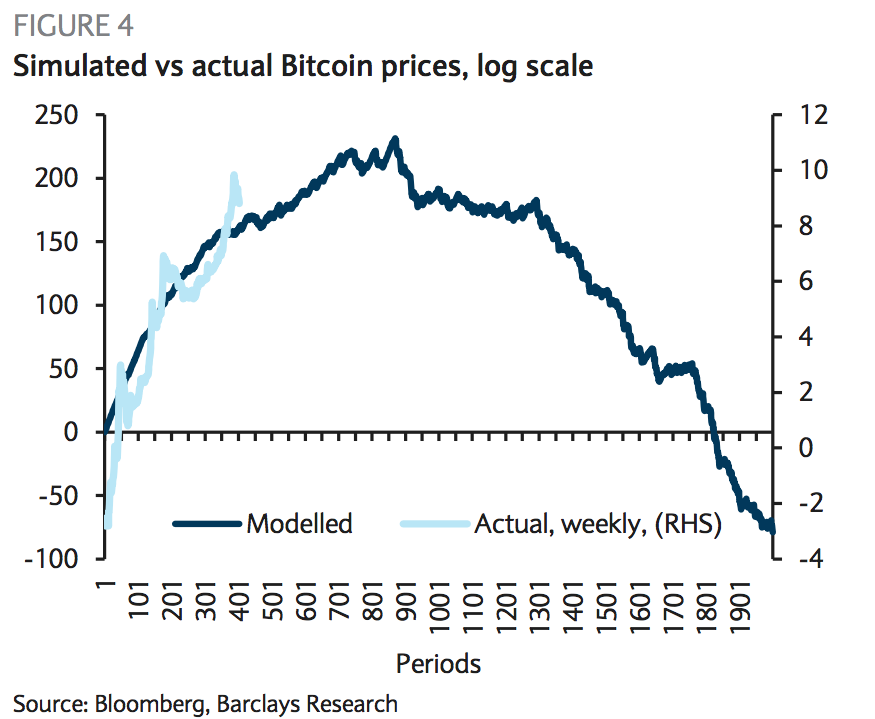 Unsurprisingly, as BI reports, the team of analysts led by Joseph Abate say there’s a striking similarity between bitcoin’s rise in popularity and the spread of viruses like influenza.

“Applying this model to speculative behaviour in crypto currencies, it suggests that once a large enough share of the population susceptible to speculation becomes aware of and holders of crypto currencies, upward pressure on prices stalls,” they write. “To the extent that holders’ attraction to Bitcoin was speculative – as our empirical analysis of historical prices suggests – those holders then become sellers, initiating an accelerating downward spiral.”