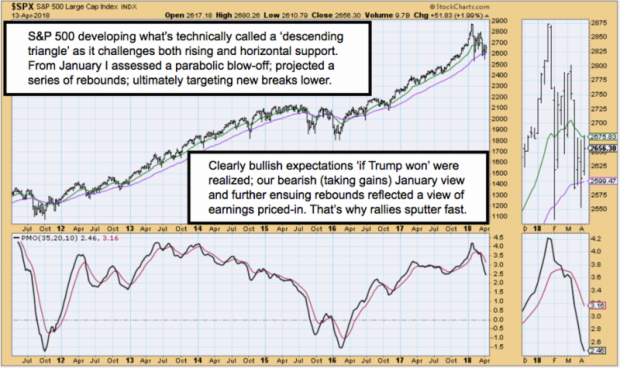 Technical trading alternates as markets continued to be embattled by a perception that ‘issues’ (like politics and social media or geopolitical risk alone) are the challenge. Sure, the market has to juggle all these balls on a daily basis. However what’s really going on is a market depending itself shy of breakdown levels (again; the important 200-Day Moving Average, for the June S&P), while cheerleaders try to pretend all would be swell if not for the ancillary influences that indeed do shuffle things day-to-day.

Ironically, the Strike on Syria doesn’t at this point (Saturday afternoon) change anything; providing there is verbal jockeying and no counterattacks coming from the Syrians. Basically they fired intercepting SAM’s (surface-to-air missiles) without guidance; either because they’re inept, or perhaps we used electronic countermeasures. I was pleased that it was a tripartite action rather than solo; and the results (which do not change the concern about a Shia Crescent concern at all.)

But for now; because it’s impossible to ascertain what might occur prior to Monday’s opening (perhaps nothing but chatter) let’s focus on the market. 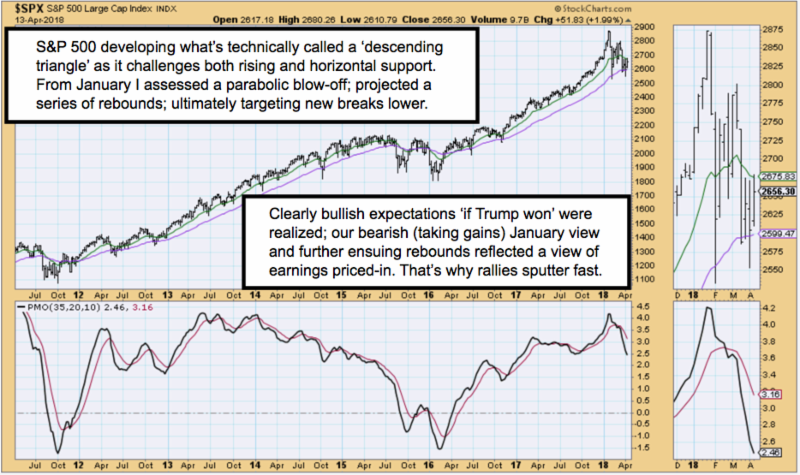 In a sense those talking of the meaning of any break of the 200-DMA, are essentially arguing a tail-wagging-the-dog approach to future movements. That’s because amidst all of this, a ‘sell signal’ for S&P’s was generated way back in January when right in the middle of a Caribbean cruise; as of course regular members know, I looked at very limited leadership in an already-parabolic blow-off thrust; to proclaim ‘crash alert’ conditions (a concern not that the market will ‘crash’ as such, but that conditions were at that point favorable for greater risk of a breakaway downside move).

The actual forecast was for a ‘breakdown’ of the S&P no later than early in February; and then some sort of ragged efforts resulting in Spring rally prospects, but ideally no higher highs for some time to come. Incidentally once we got the purge (the February ‘flash crash’) we called for stability in the form of an ‘automatic rally’ (a technical term some are familiar with); a series of alternating moves I simply called ‘Hail Mary’ rebound attempts to forestall reckoning with ultimately lower downside prospects and hence I absolutely departed from the consistent optimism shown since just before the 2016 Election, when I projected ‘market to the moon’ if Trump won. (I said at the time, even if you hated Trump, hold your nose and buy stocks, as it will be good for business and viewed as a huge regulatory relief too.)