Somewhat late to the game, the Federal Open Market Committee finally acknowledged that they are watching the risks to financial stability stemming from the more than $1 trillion market for U.S. leveraged loans. Earlier, the Bank of England and Bank of Australia raised the alarm bells concerning the rapid expansion of leveraged loans worldwide. The BoE was so deeply concerned that it warned that the “global leveraged loan market was larger than – and was growing as quickly as – the US subprime mortgage market had been in 2006”. Adding to this concern was JP Morgan’s revelation that it had US$100 billion in loans outstanding and that the private credit market had “exploded in size” over the last few years. When added to outstanding high-yield bonds, corporate debts now exceed US$2.4 trillion. 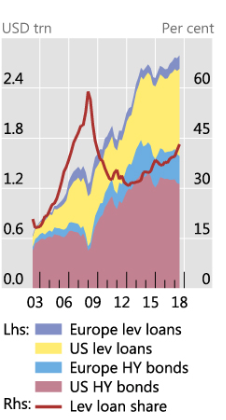 A leverage loan is a commercial loan provided to a borrower with a non-investment grade rating, by a group of lenders. Many of the loans pay a floating rate, typically based on LIBOR plus a stated interest margin. If the interest margin is above a certain level, it is considered a leveraged loan. Others classify these loans based upon debt rating in which loans rated below investment grade are considered leveraged. By now, the reader can see why leverage loans remind us of the U.S. mortgage market leading up to the 2008 financial crisis. It is often referred as a “shadow market” because trading is done amongst private entities and is not supervised by government. More to the point, whereas conventional banks can have their loans directly reigned in by regulators, the leverage loan market  is not subject to credit restrictions and remains unregulated.

In the search for yield, investors have turned to leverage loans to take advantage of the floating rates. The prospect of interest rate hikes has increased the relative appeal of leveraged loans, compared to high-yield bonds which offer only a fixed rate coupon.