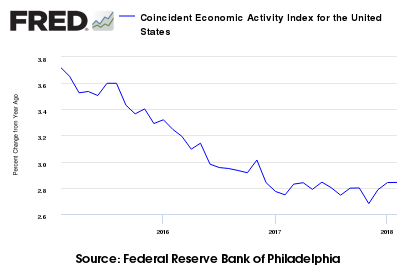 Analyst Opinion of the Current Status of the Coincident Indicators

The reality is that most of the economic indicators have moderate to significant backward revision – and this month they are generally more positive. Out of this group of coincident indicators discussed in this post, only ECRI and the Aruoba-Diebold-Scotti business conditions index have no backward revision – and both have a good track record of seeing the economy accurately in almost real time.

The Federal Reserve Bank of Philadelphia has released the coincident indexes for the 50 states for February 2018. Over the past three months, the indexes increased in all 50 states, for a three-month diffusion index of 100. In the past month, the indexes increased in 46 states, decreased in two, and remained stable in two, for a one-month diffusion index of 88. For comparison purposes, the Philadelphia Fed has also developed a similar coincident index for the entire United States. The Philadelphia Fed’s U.S. index rose 0.7 percent over the past three months and 0.3 percent in February.

Per the Philly Fed: