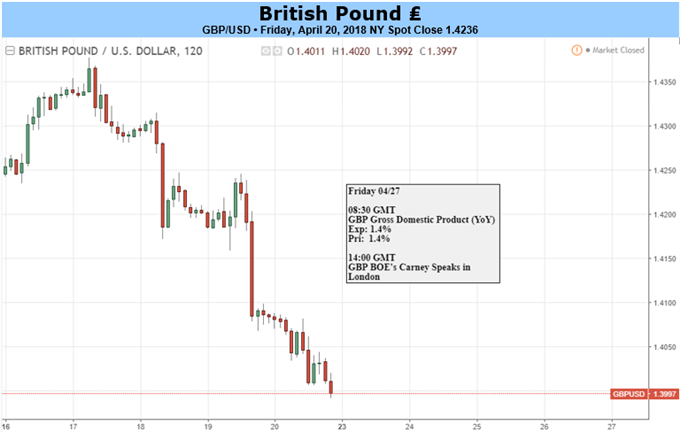 We remain neutral on GBP in the short-term but believe that the long-term uptrend in Sterling remains in place and offers potential dip buying opportunities. Strong wages and jobs data point to a potential build-up of domestic inflation, which will take over from imported inflation which is tailing off due to the strength of the pound. While expectations of a May rate hike have fallen from a peak around 80% to a current level of 55%, pushing GBP lower, BoE governor Carney said yesterday on rates that he didn’t want to get ‘too focused on the precise timing, it is more about the general path’.

Speaking on Friday BoE hawk Michael Saunders said that the economic slowdown seen in Q1 is questionable and probably temporary, adding that the economy does not need as much stimulus as before.

Ahead next week, the first look at UK Q1 GDP which is expected to slip lower from last month’s 0.4% to 0.3% due to weather-related disruptions, while the annual rate is expected unchanged at 1.4%. Brexit talk is also likely to re-surface after reports that the EU have rejected UK plans for solving the Irish border problem, a situation that would leave UK Prime Minister battling those within her party who want to stay in the Customs Union and those who don’t.

The GBPUSD chart below shows how Sterling has weakened in the past 4 days on the back of data and BoE commentary. It also highlights that GBP is still trending higher with lower highs dominating in the last six weeks. The stochastic indicator also highlights that GBP is currently oversold, while the 50-day moving average is providing support for the GBPUSD. In the short-term the markets would turn neutral-to-negative if the pair traded and closed below the April 5 low print at 1.39654.