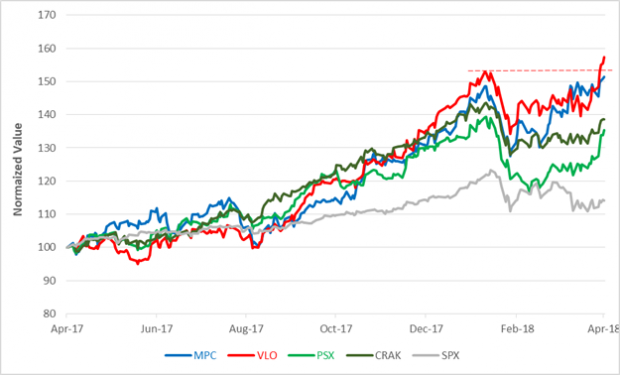 Is VLO An Acronym For Volatility?

Oil refiners are riskier than the market but …

With the equity market wobbling, investors have been finding refuge, er, returns in an unlikely quarter – the oil sector. No, not integrated behemoths like ExxonMobil Corp. (NYSE: XOM) but independent refiners such as Valero Energy Corp. (NYSE: VLO). Over the last 12 months, refiners have outdone the S&P 500 Composite significantly. Here’s a picture of the bigger refiners’ recent performance: 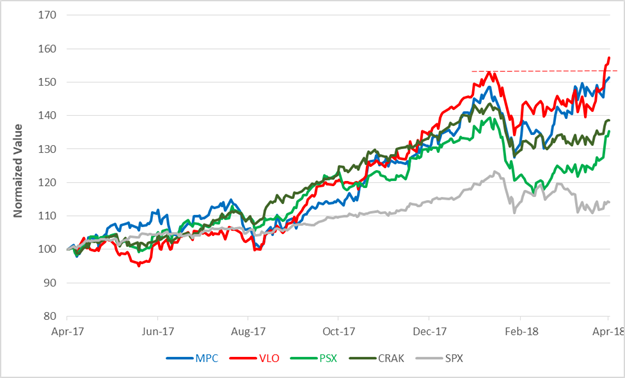 Valero’s on the top of the heap with a 365-day gain exceeding 57 percent. Compare that to the S&P’s contemporaneous price appreciation of 14 percent. The reason Valero isn’t a refuge? Volatility. There’s plainly more price variance in the oil stocks. Among the refiners, the winner of the volatility derby is Marathon Petroleum Corp.  (NYSE: MPC) with a standard deviation exceeding 21 percent. Valero weighs in at less than 20 percent while the S&P 500 churn rate is just 12 percent.

Valero, like Marathon and Phillips 66 (NYSE: PSX), is an S&P 500 component. Over the past year, most of Valero’s price movements – represented by its r-squared (r2) coefficient – could be explained by the S&P index trajectory. That correlation seems to be loosening now.

Among the major independent oil refiners, only Valero has staged a definitive upside breakout during the S&P 500 stumble. The company’s stock price just poked above the $100 level and is now aiming for a long-term technical objective of $124. What do I mean by long-term? Well, the last $24 hike in Valero’s price took just six months, but that was during the broad market’s recent euphoric run-up. It’s likely the oil refiner’s stock will need more time than that to reach its target – if it reaches its target – without the broad market at its back.