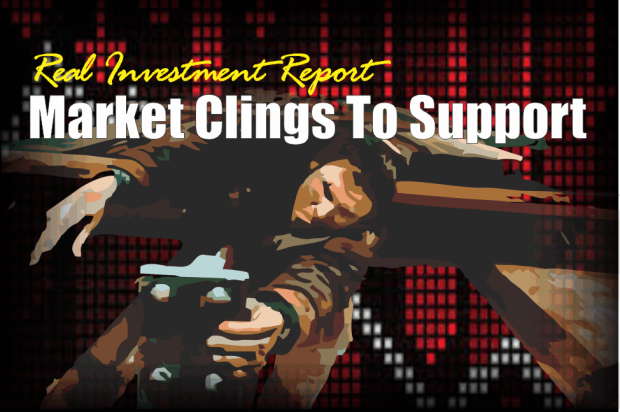 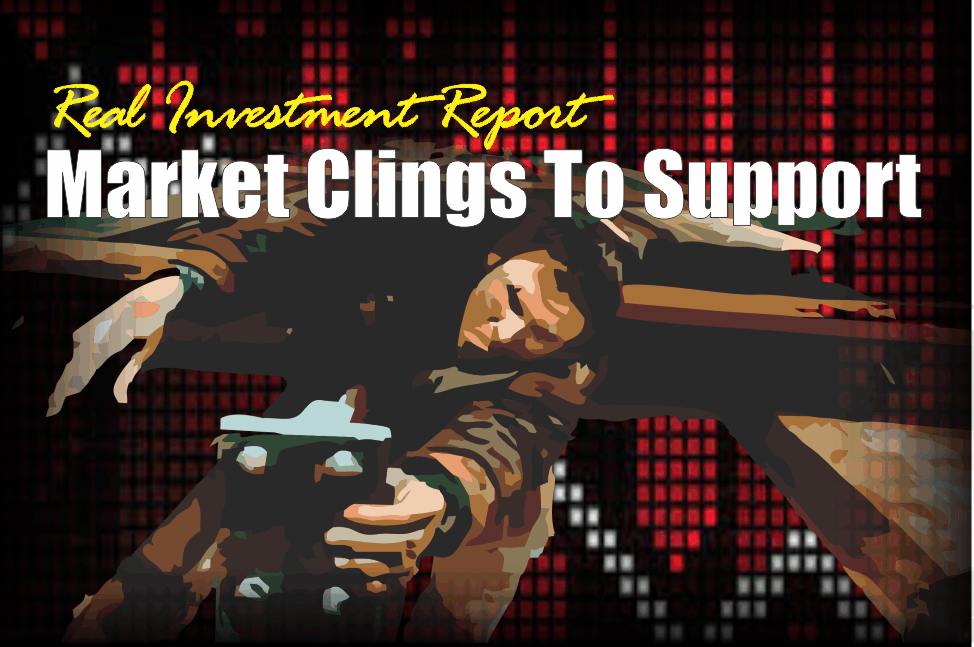 Over the last couple of weeks, as interest rates surged above 3%, we explored the question of whether something had “just broken”  in the market.

This is an important question given the current stance by the Fed appears to be considerably hawkish as noted by the recent minutes:

“A few participants expected that policy would need to become modestly restrictive for a time and a number judged that it would be necessary to temporarily raise the federal funds rate above their assessments of its longer-run level.”

The Fed is worried about asset bubbles…

“Some participants commented about the continued growth in leveraged loans, the loosening of terms and standards on these loans, or the growth of this activity in the nonbank sector as reasons to remain mindful of vulnerabilities and possible risks to financial stability.”

In other words, the Fed is “gonna hike until something breaks” and it will likely break in a credit related area like junk bonds, covenant-light, and leveraged loans.

Important note: It won’t be one, or another, but all of them at once when “something breaks.”

As noted by Bloomberg: 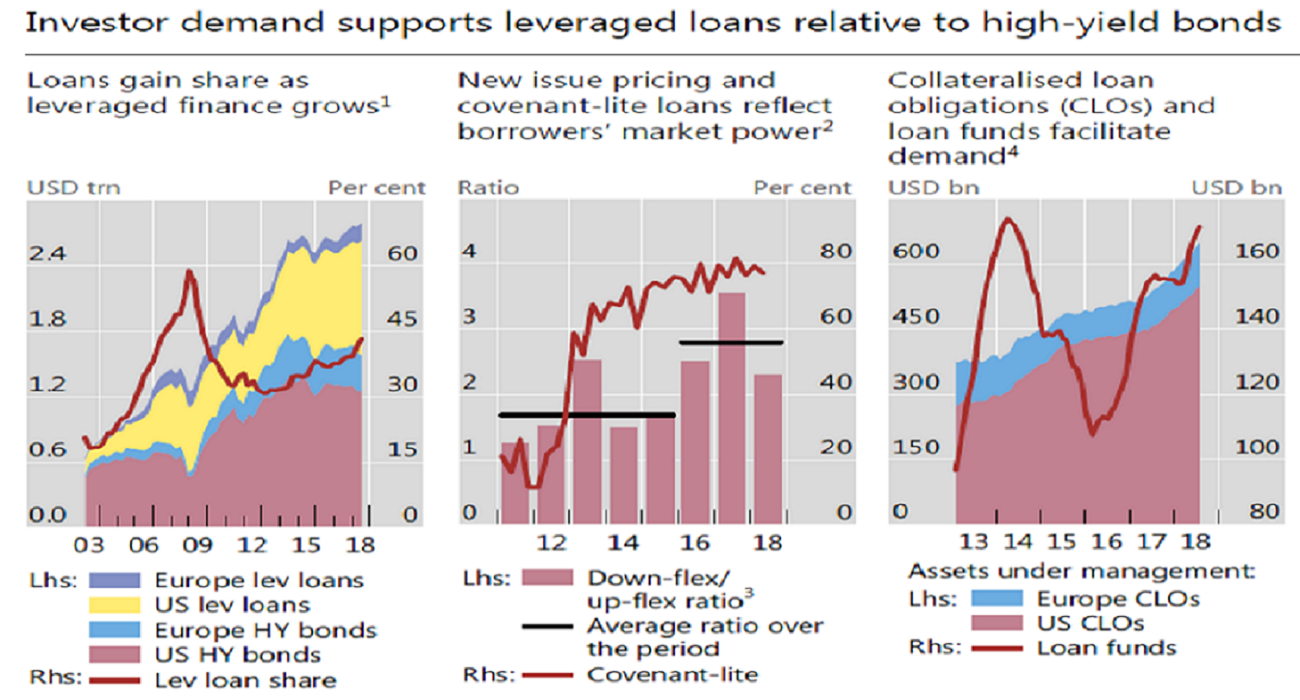 With substantially weaker loan documentation, accelerating demand for CLO’s (collateralized loan obligations), and a proliferation of covenant-lite loans, the risk to the next “financial crisis” has risen markedly given the massive surge in debt due to an extended period of ultra-low interest rates. 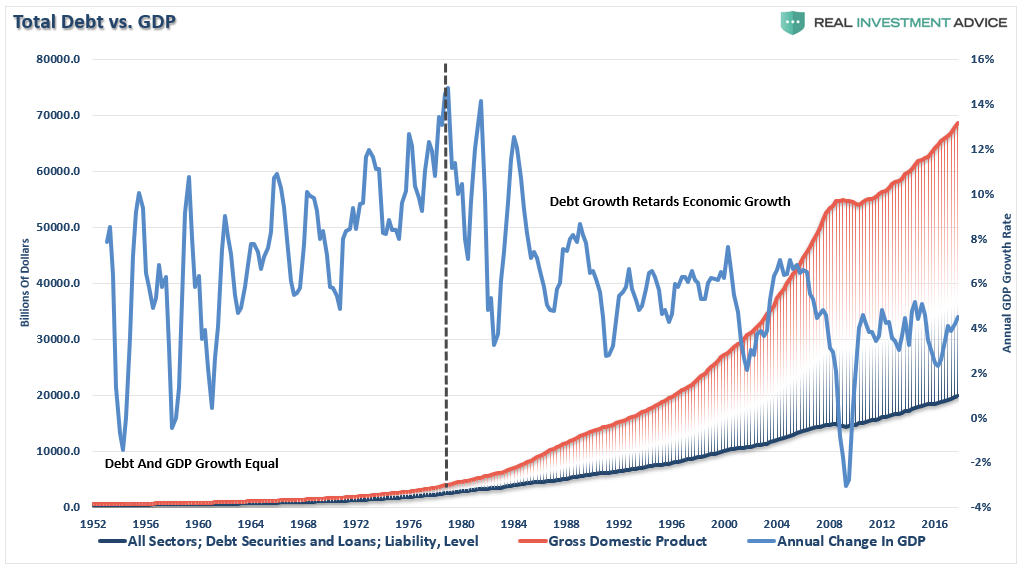 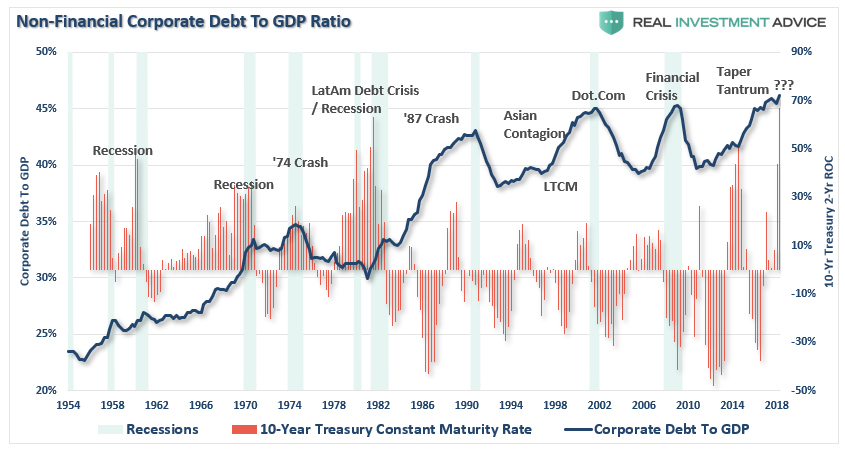 Pay attention to the warnings the credit market is sending.

The market may already be sniffing out an impending problem. I noted last week that if interest “rates remain above 3%, stocks are going to continue to struggle.”

This past week has been a decidedly tough struggle for stocks to pick themselves up after last week’s drubbing. While we saw a sharp reflexive bounce earlier this week, that bounce quickly faded as stocks returned to retest support at critically important levels.

The chart below is the updated “pathway” chart from last week. I have only updated the price on the chart again this week but did NOT change any of the previously detailed paths set out last week.

As I wrote, no matter how many different paths I trace out, the possibilities of the market rallying back to new all-time highs this year have been greatly reduced. Therefore, all four possibilities continue to suggest a broader topping pattern in place through the end of this year.

The good news, if you want to call it that, is the market DID hold the 200-dma for the week. With the market deeply oversold currently, we still expect a bounce going into next week. This bounce could well be supported by the end of the “blackout” period for companies to buy back their own shares.

Also, note that back in early February we saw a similar short-term bottoming process where the initial bounce failed then bounced in mid-March before failing again to retest the February lows.

My suspicion is that we will likely see much of the same action over the next month or so. Currently, pathway #2a and #2b are still the most likely outcomes currently and should be used to “sell into” to raise capital, deploy portfolio hedges, raise stop levels, and reduce risk.

Pathway #2a: The market rallies from current levels to the January high. Again, this would likely be fueled by a stronger than expected earnings season and a pickup in economic activity. However, the run to the January highs is capped by that resistance but the market finds support at the 62% Fibonacci retracement level just below. (30%)

However, the risk of Pathway #3 becoming a reality has also risen markedly during this past week. But given the deep short-term oversold condition, we are due for a fairly strong bounce first.

With the understanding the economic and fundamental background may not be supportive for higher asset prices heading into 2019, it is important to note the market is sending a very different technical signal this time. As discussed last week, this is the FIRST time the market has broken the bullish trend line that began in 2016.

Importantly, the market surge last week tested, and failed, at the previous rising bullish trend line. While the market is still holding important support this past week, the deterioration in momentum is warning of a potentially larger correction process in the making. 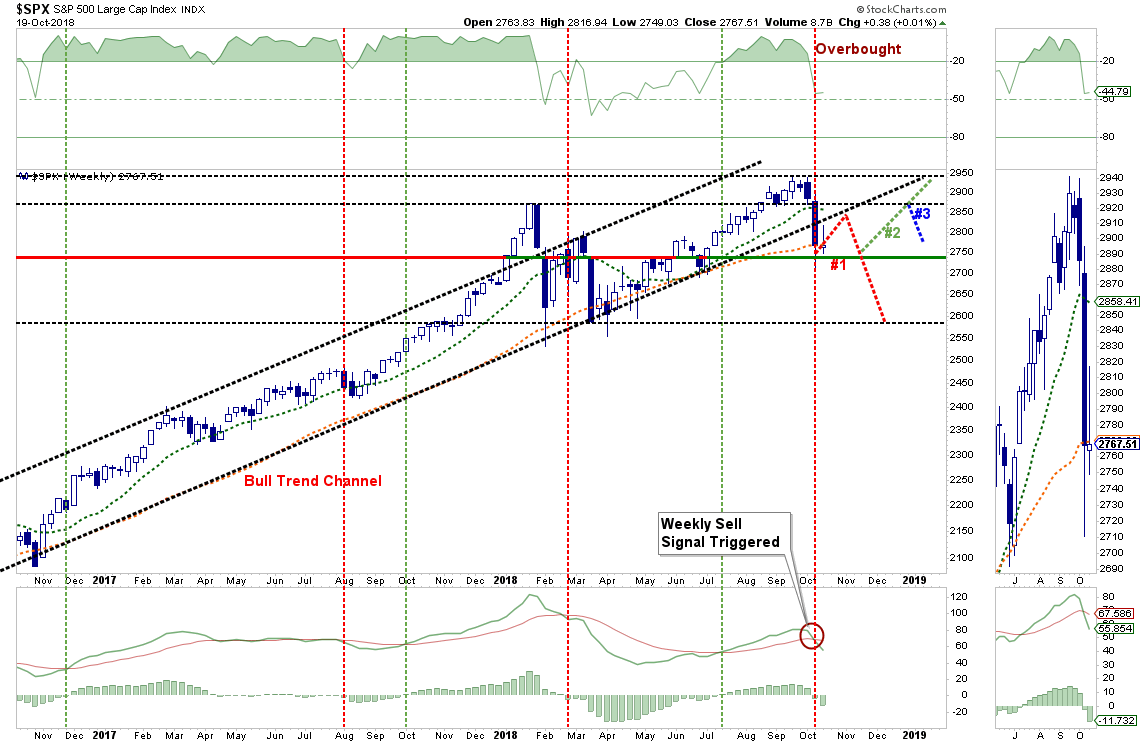 With an early “sell signal” intact, the warnings to reduce portfolio risk could not be more prevalent.

Importantly, we should not react emotionally to these issues but be opportunistic about making changes. With the “blackout” period ending, earnings season in full swing, and a deeply oversold market – the likelihood of a substantial rally is a very real possibility. However, just because the market rallies, does NOT mean the problems are solved and the “bull market” is back in full swing. Only new “all time” highs would signal the return of the “bull market” and given the current technical, fundamental, and economic backdrop such is only a faint possibility.