Money For Nothing: The Importance Of Stocks Over Flows

Economists are fond of making a distinction between flow and stock concept, and woe to one who confuses the two. A flow is a variable measured over time, such a the budget deficit. A stock is an accumulation of flows and is measured at one time, such as the US government debt. Income is a flow, while savings is a stock term. 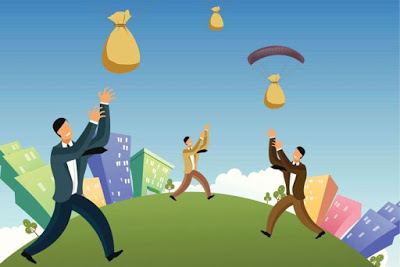 Turning to the US external accounts, stock and flow are also important. The US annual current account deficit is a flow term. The net international investment position is the associated stock term. The idea here is that as a result of the US buying more goods and services from the world than it sells leads to foreign investors accumulating claims against the US. These claims take the form of portfolio investment, such as stocks and bonds, but also direct investment, as factories and property.

It sounds straightforward, but it is anything but. Last year, the US recorded a current account deficit of $466 bln. Counter-intuitively, and overlooked by economists and policymakers, the US net international investment position improved $470 bln.

Let that sink in.The US bought $466 bln more goods and services than it sold the world and yet foreign claims on the US fell, and not by an insignificant amount. The US lived 2.4% beyond its means in 2017, and y it owed the world less. Is this the closest thing to money for nothing?

The increase in the flow (deficit) did not adversely impact the debt (stock).But that is because the flow swamped by the size of the stock. By the US government accounting, Americans owned about $27.6 trillion of foreign assets at the end of last year. Foreign investors owned around $35.5 trillion of US assets.

A small change in the valuation of the large stock of assets can outweigh the impact of an annual change in flows. The valuation adjustments include changes in the dollar’s value. For example, last year’s dollar decline increased the value of the foreign stocks and bonds Americans own. The dollar’s decline does not impact the dollar value of foreign ownership of US stocks and bonds. Similarly, if the basket of international equities American own outperforms the basket of American stocks that foreign investors own, the US net international investment position improves.