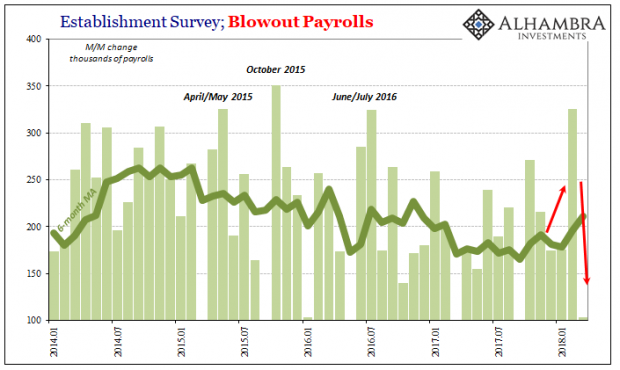 Never get hung up on one payroll report, good or bad. The Establishment Survey series, seasonally-adjusted and statistically smoothed as much as humanly possible, is still incredibly noisy. It didn’t used to be this way, which is an important clue that “something” has changed. The lack of consistency in the monthly measurement is as the unevenness of overall economic growth. 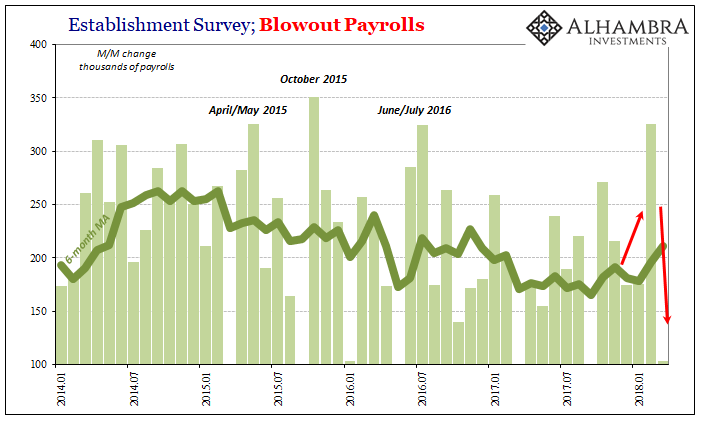 That way we aren’t surprised by any one weak payroll report because we realize they all are. What is truly inconsistent is how these are characterized as something they are not. The bigger issue is why.

If we go back to around the beginning of QE3 and QE4 in late 2012, the Federal Reserve’s best statistical models projected a gentle downward trend for the unemployment rate. They did so starting with the assumptions that those particular QE’s would be a powerful and lasting boost to the US economy. 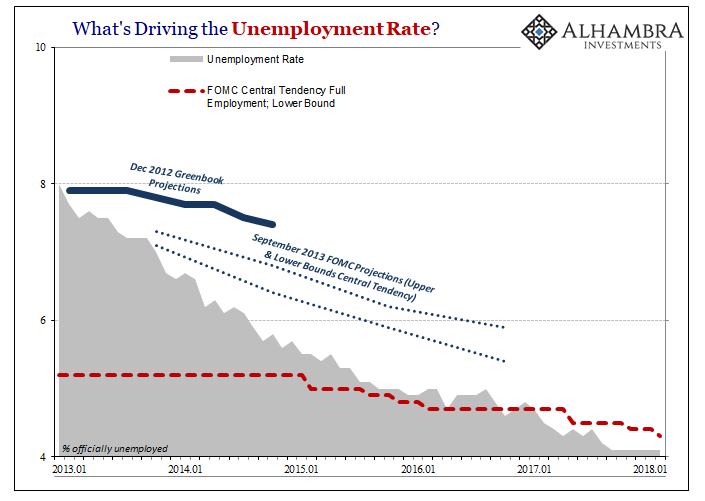 Even so, their models calculated that by the end of 2014 the unemployment rate would only decline to about 7.4% from then around 8%. That would have been considered good progress, and monetary success in keeping the economy in line of anticipated recovery.

Instead, by the end of 2014 the actual unemployment rate had collapsed far faster than any economist could have imagined. It was already at around 5.6% to begin 2015, which was into the range their staff economists had forecast for full employment.

Obviously, something was missing given these results. In forecasting the rate in the Greenbook (or any other modeled predictions, such as those in September 2013 shown above), it was always assumed that the looming recovery would act like any other. In historical experience, and in common sense, as growth picks up in that cyclical process people who were then outside the labor force would begin to either enter or re-enter (the latter having been displaced by the recession part of the cycle).

It balances out the unemployment rate to some degree, to where there is meant to be robust growth for the numerator that draws in these displaced workers onto an almost equal pace for the denominator, too. That’s what the December 2012 Greenbook was expecting, therefore setting the narrative for each and every policymaker and Economist (redundant).