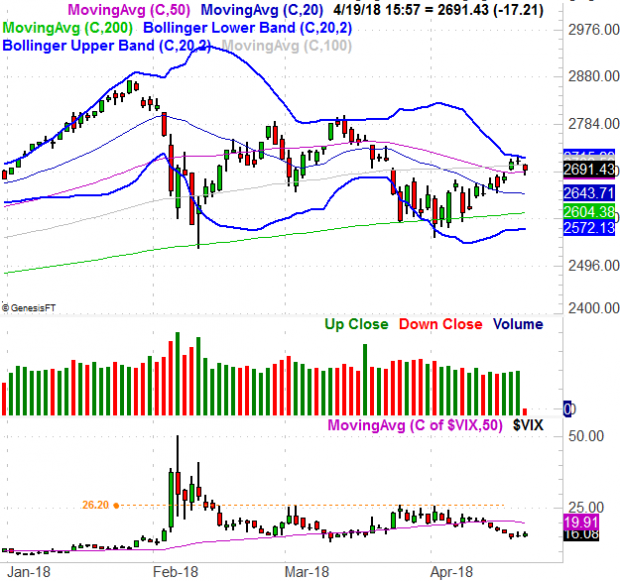 We’ve suspected for a while now that investors weren’t really as bullish as the quick look at the chart would suggest. Mostly, they’re indecisive, not really sure what to expect.

After Thursday’s closing bell rang, we know for sure. The S&P 500 topped exactly where we would have expected it to on Wednesday, but with Thursday’s loss, we can also see the bulls have drawn an important line in the sand right where we’d expect them to.

The daily chart of the S&P 50 below tells the tale. The upper Bollinger band (20-day, blue) halted the uptrend on Wednesday, forcing the pivot. The bears dished it out on Thursday… right up until the 50-day moving average (purple) was going to break or fail, as a floor. The bulls held the line there though. 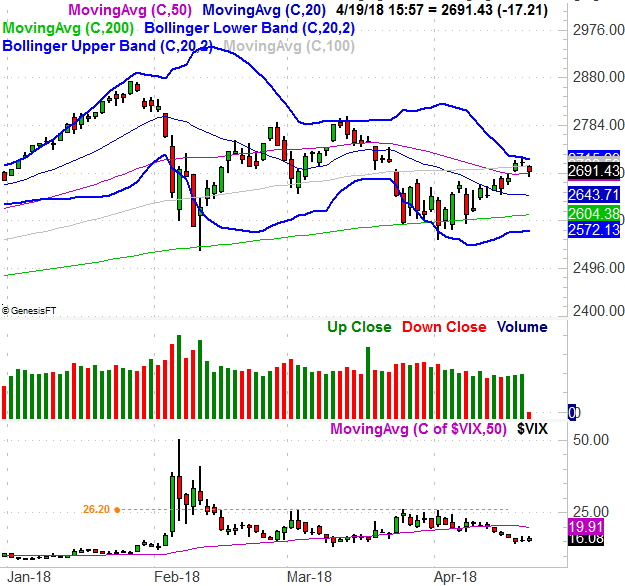 It could be worse. At least the indices (this analysis doesn’t just apply to the S&P 500) are finding support at a pretty important level. Besides, we’d expect to see some resistance at the upper Bollinger band; stalling there doesn’t mean it won’t be hurdled. If we’re being completely unbiased though, the problem with the market now is the same problem it’s had for weeks. That is, there just isn’t a whole lot of committed interest in stocks right now.

We’re not interested in that specific data, however. It’s too erratic by itself to analyze. To make better use of it we want to determine the trend of the two datasets. We can do so by applying moving averages of each data set.

That’s what you see on the bottom portion of the image below. The thicker, brighter green line is a moving average of the daily “up” volume, while the brighter, thicker red line is a moving average of the market’s “down” volume. When smoothed out like this, we can get a good feel for how traders really feel about stocks by figuring out what they’re actually doing with their money.