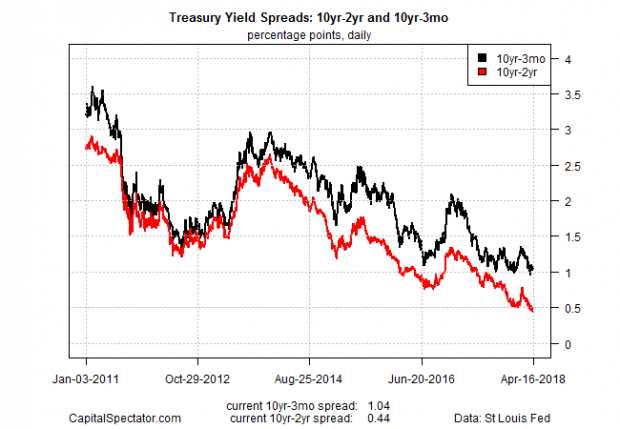 The difference between the 10-year and 2-year Treasury rates narrowed to 47 basis points on Monday (April 16) – the smallest gap since late-2007. The last time this widely followed spread was this close to zero the US economy was close to a recession. Is this indicator flashing a similar warning today? No, according to a broad reading of the economic data, which reflects a healthy trend. The question is whether the narrowing yield spread is still a reliable late-cycle warning that the macro profile will weaken in the months ahead? 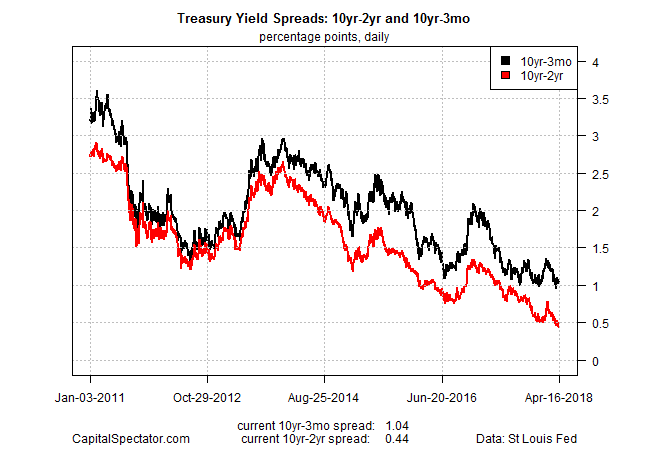 But some economists are reluctant to dismiss the narrowing rate spread as an irrelevant artifact of business cycles past. For example, Lars Christensen of Markets and Money Advisory last week posed the question: “Will Jay Powell murder the expansion in 2020?” He explained that “I am presently more worried about the Fed causing a recession – likely in 2020-21 – than by a sudden spike in inflation.”

Worrying about recessions that far in advance is the equivalent of guessing. Nonetheless, with the yield curve in shooting distance of inverting – short rates rising above long rates – it’s becoming harder to ignore the subject.

The arguments in favor of shelving the yield curve’s warning this time around include the explanation that an extraordinary level of foreign demand is depressing the 10-year yield and so the dependability of the signal for the US economy has been compromised for business-cycle analysis. The opposing view is that the crowd always claims that “it’s different this time” during late-cycle yield-curve warnings and the results aren’t pretty.