US Dollar Looks To GDP Data For Another Upward Push 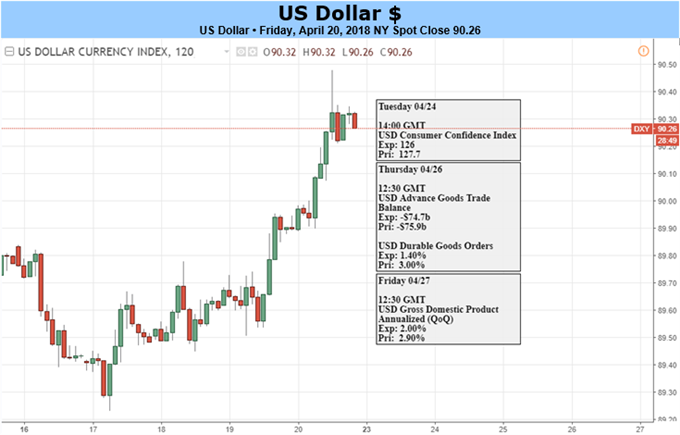 FUNDAMENTAL FORECAST FOR THE US DOLLAR: BULLISH

The US Dollar has launched a spirited recovery, producing the largest upswing in nearly three months last week. The move was encouragingly rooted in old-fashioned macro fundamentals rather than fickle geopolitical trends, which have become increasingly influential over currency market price action since the beginning of the year.

A combatively hawkish speech from Fed Governor Lael Brainard – previously one of the most dovish members of the US central bank’s policy-setting apparatus – appeared to inspire sharp upshift in tightening bets. The 2018-2019 rate path implied in Fed Funds futures steepened and the spread between 10- and 2-year US Treasury yields saw the largest two-day gain since early February.

Ms Brainard invoked looming “cyclical pressures” – implying a pickup in the pace of inflation – and warned that they would amplified by expansionary fiscal policy. She also cited stretched asset prices and business leverage levels, urging against complacency in the face of growing vulnerabilities. A survey of businesses from the Philadelphia Fed reinforced the point, showing firming realized and expected price pressure.

First-quarter US GDP data headlines the calendar in the week ahead. It is expected to show the annualized growth rate slowed from 2.9 to 2 percent as 2018 got underway. Leading PMI survey data suggests otherwise however, pointing to a pickup in manufacturing- and service-sector activity in the 12 months to March compared with the preceding quarter. An upside surprise may lift the greenback further.