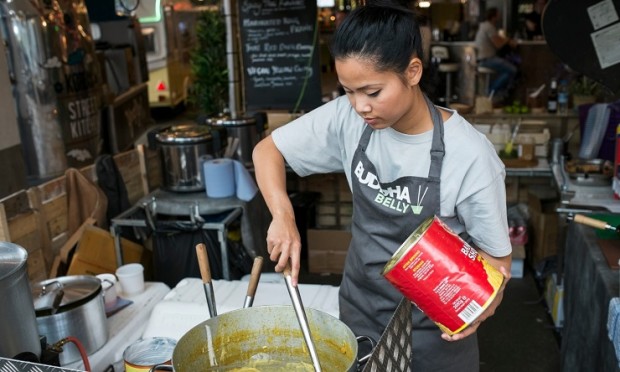 How can we get street food back on to the streets?

It is a curious paradox, but outside London, the one place you rarely find street food … is on the streets. Traders frequent local markets and outdoor events, but due to a combination of factors, notably the British weather and a lack of desirable town-centre pitches, only a tiny minority of them regularly serve food on the streets. The Kitchens, which is due to open in Manchester on 11 June and will bring together six traders under one roof in the city’s Spinningfields development, typifies where street food is heading: indoors, in the form of multi-trader hubs.

The Kitchens is unusual in that it will be open for a year, during which time its occupants – including the excellent Chaat Cart and the Latin American-inspired, Yakumama – will compete to win further backing from Spinningfields’ landlords, Allied London. The principle that, in order to thrive, street-food traders need to work together to attract a crowd, is well established. Any romantic notion foodies may once have had about seeing lone food vans operating across our cities, offering a cheap, colourful alternative to the high street, remains a distant dream. Instead, the scene is all about collective action.

Andrew Critchett, proprietor of Leeds-based Fish & and the founder of the collective, Northern StrEats, says that such banding together has been crucial, for two main reasons:

“Street food works better as a cluster of traders, not a few solo units on street corners which quickly become part of the wallpaper of the city. I had a permanent pitch in Leeds city centre and, with the council, I organised a street-food event with 12 competitors and our takings went up by over 50% on those days. That became the monthly World Feast. Eating outdoors is a very peculiar and social thing. The dynamics of it are interesting. I still think Mr & Mrs Average see eating on the street as a bit vulgar, unless it’s at an event of some kind. So clusters, variety and sharing food are what makes it work.”

Beyond us being too uptight to eat on the streets, there are other issues that may have contributed to street food failing to break through as a day-to-day resource. Many councils have been slow to open up space to new traders. There has also been something of a backlash against the many bandwagon-jumping traders nocking out distinctly average food. And prices have crept up, often without a commensurate rise in professionalism. As a trader, you cannot turn up with insufficient stock or malfunctioning kitchen equipment and expect people to pay close to £10 for a meal. Punters accept a level of improvised unpredictability in street food, but the prices have to reflect that. And the food still needs to shine.

Read more: How can we get street food back on to the streets?